My project was to try something different every day we were in France throughout June, and to build on the ideas I’d got from a recent one-day workshop in Yorkshire. I have broken my project down into 4 sections covering each of the main locations where stayed. Each picture tells a story, for me anyway.

You can click on any thumbnail to get a bigger image and page through the relevant gallery.

We spent 4 days camped by the side of a lake. The weather was generally bright and sunny with thunder storms developing late afternoon. The lake itself had plenty of opportunities for both of us. 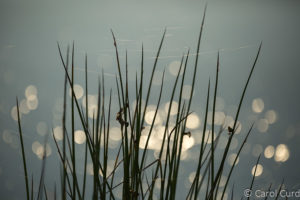 The lake had plenty of reeds around the edge as I experimented with the concept of ‘bokeh balls’ from my workshop. The angle of the sun was critical, as was getting the focus point right. 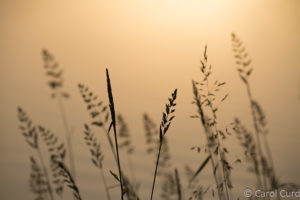 I woke up at 6am the next morning and looked out of the window to see the lake covered in mist which I hadn’t expected. I got up and out straight away. The misty lake didn’t quite work, the grasses did though. John was at the other end of the lake searching for damselflies covered in dew. Luckily he found some. 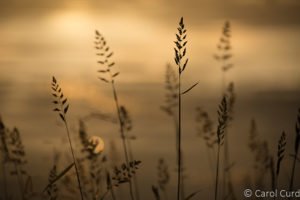 The next morning I’d set the alarm for 5:30 so we could catch the mist but there wasn’t any this morning so no dewy damsels for John. The grasses still looked lovely and I kept the idea in mind of developing a set of three which I have still to put together. 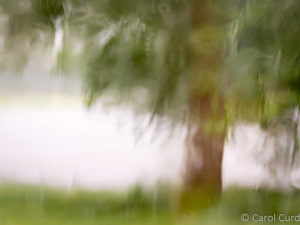 Mist this morning wasn’t expected so we had a lie in. The storm came earlier than expected and my camera was in the car when the rain started. It came down so heavily, it was streaming down the caravan window. I just picked up John’s camera are started clicking away. Wrong! I hadn’t checked the settings, it was on ISO 1600 and way under-exposed so given his is a crop sensor, the images were noisy to say the least. I’ve done the best as I can with this one and it’s here as a reminder to check next time! 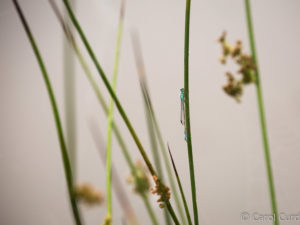 Our last morning and we were awake early. Unfortunately there was no mist or dew again. I’ve selected this one as I like the composition.

Our next stop was the dairy sheep farm for 2 weeks catching up with friends and to see how the lake was recovering from the Koi Carp fish farming of a few years ago, unfortunately not very well. The weather during the first week was dreadful, the campsite was water-logged and I really needed my wellies. The lake provided plenty of opportunity, the fields not so much as it was so wet and it was impossible to walk around the lake most days. During this time I discovered that I really don’t like taking photos in the rain! 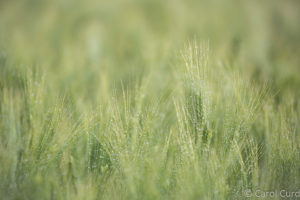 Hmmm, what can I say. I thought it had stopped raining for a while but it hadn’t and I got quite wet. The most interesting image I could find was rain drops on the corn! 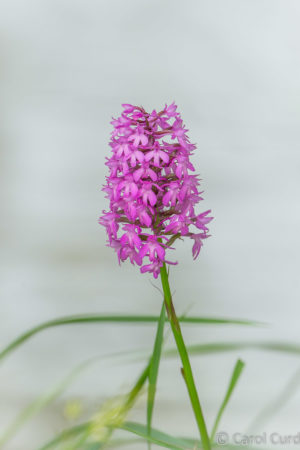 Another day and another image from the lake. This time a lone Pyramidal Orchid. The scene was messy so this is the best of the bunch. 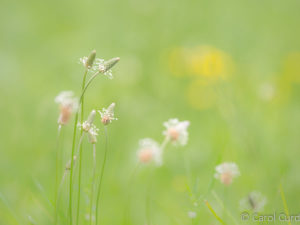 We’d gone to another lake to see what the dragonflies were like there. While you-know-who was investigating, I was experimenting with shallow depth of field in meadow. 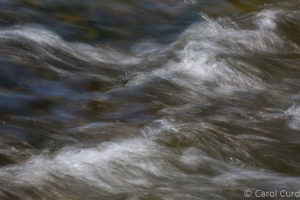 Another day searching for dragonflies with me experimenting with the ‘scratchy lines’ in the river. Unfortunately the ticks found me! 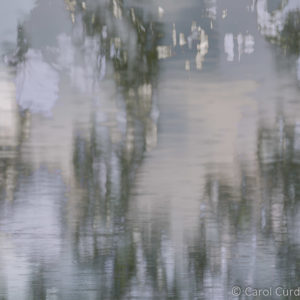 Another wet day by the lake and I went out to see what I could do. I ended up experimenting with the different blend modes. I really this one using Bright mode. I tried to get 3 that would go together but only have 2 that are good enough! 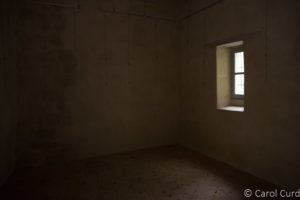 This day was more than wet, it was torrential and we went on an organised trip around the art exhibition which was displayed in the open air. Hmmm. This was taken in desperation inside a dark chapel just because.

These next two go together. We’d seen this field of poppies about 15kms away a few times and decided to stop on this day to check the line-up. Unfortunately it wasn’t raining that hard when we decided to stop but once I got out of the car, it chucked it down. I focussed on the hut, both are handheld. The first one is f16, 1/100 sec and you can see the streaks of rain.

This one is f5, 1/1000sec and the rain just looks grainy and not to my liking. I won’t bother again. Incidentally the view from the top of the field is better. Next time! 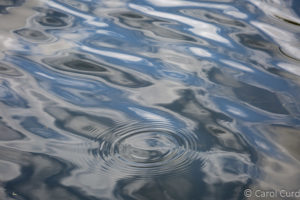 I decided to see if I could take photos of the rain drops. This is where I wasted thousands of pixels. I loved the reflections under the trees, the angle was critical. You needed to focus on the water which unfortunately meant all the little bits of stuff that you usually don’t see on the water, is also in focus and if you focussed further out the effect of the reflections disappeared. I’d hoped for a set of three but they all ended up in the bin. I rescued them and have kept some so who knows.

A sunny day so we walked around the farm looking for poppies standing up above the corn just waiting to be isolated. No such luck unfortunately. I ended up experimenting with multiple exposures to see what I could do. These are both Dark mode with one image of the poppies followed by 2 of the corn.

I couldn’t decide between the two and if nothing else, it shows how difficult this can be. 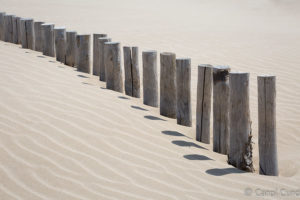 We enjoyed the sun so much, we decided to go to the coast again. We found several rows of stakes in the sand to stop the wind blowing the sand around too much. I really enjoyed experimenting with different line ups and depth of field.

Back on the farm trying to capture the corn blowing in the wind. Not sure about this but I tried. 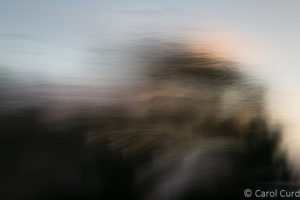 This was another favourite haunt of ours and while the weather was good I found the campsite itself stifled any desire to go out with my camera. Consequently my project didn’t do very well here. 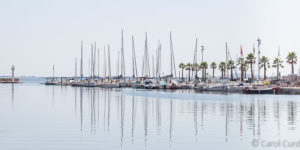 Last time we stayed here, we got up early and cycled into Meze for sunrise and my initial plan had been to do the same this time. Our first afternoon we cycled down to reacquaint ourselves with the harbour and to check for line ups. I only had my wide angle lens so these 2 are crops from a larger image so I knew I would need my telephoto lens. 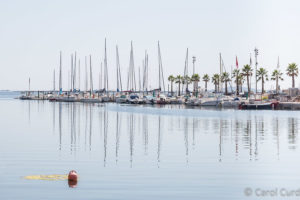 We went further round and discovered, like Spain, the swimming area was covered in buoys. That added to the fact that sunrise was much earlier than the previous time meant we didn’t go out for sunrise. 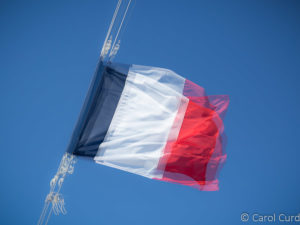 We did however go on a boat trip around the etang to learn about the mussel and oyster farming. A very interesting trip. One the way back, John was interested in what in-camera multiple exposure would make of the ‘flappy flag’ like the one he did in Greece may years ago. Gosh, nearly 15 years ago! Not badly is the answer. The colour mixes are interesting. This one is Average … 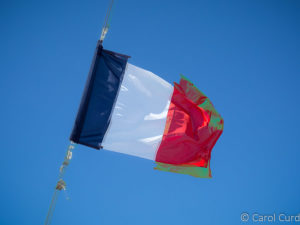 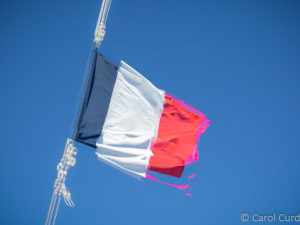 … and this one Bright.

This was a new place for us. The weather was stunning as was the scenery but again, the campsite stifled my project, or maybe it just didn’t restart.

We were driving back one afternoon, I saw this stand of trees on the hillside. I was standing precariously by the side of the road so wasn’t able to set up tripod up. I took several shots before realising I should be bracketing to deal with the contrast. The first is one image, rescued as best I can.

This is the bracketed one. It may not show here but I think this one has more life to it.

The same stand of trees the next morning, with clearer skies and some cows. This one is a straight shot …

… and this one bracketed. I was glad I remembered bracketing as it’s not something I usually do. I hope I will next time I’m in a similar situation.

Would I do this again? Yes, I think my project was a success even if it did falter towards the end. I went out more and at times when I wouldn’t normally have done. I saw more photographic opportunities and I think I came away with more interesting images. They don’t go together as a set, they’re more of an exploration of different ideas. I will certainly repeat the exercise, especially in Spain, and maybe include specific themes so I develop sets of images.